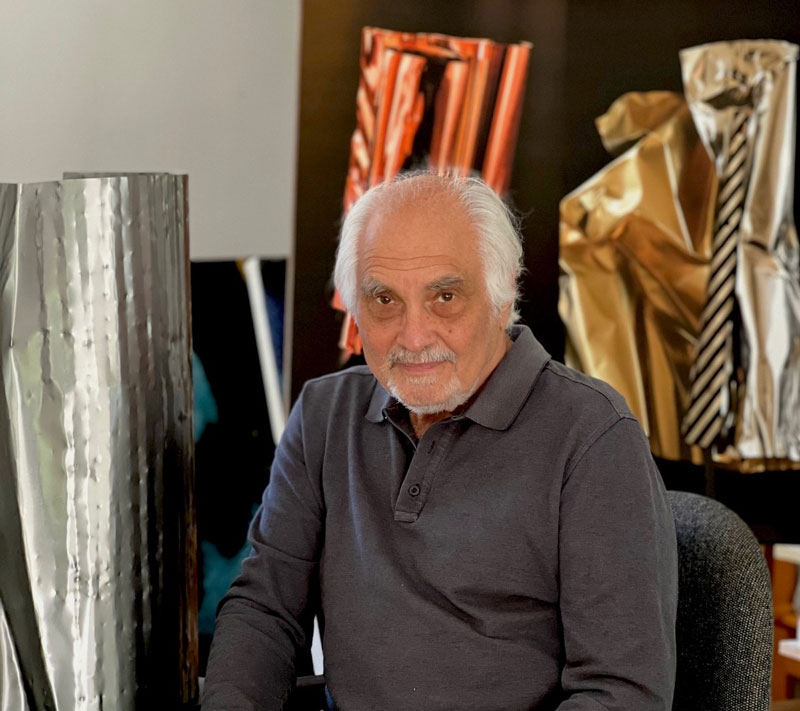 Bernard Mindich is a multimedia artist living and working in Northern Westchester since the late 1980s. His dominant form of expression has been in photography, much of it as a street photographer documenting people, places and things in a variety of thematic studies and genres, including substantial bodies of abstract works in a painterly style. His photography has been extensively exhibited and collected and is represented in 5 published books and many online projects. However, his earliest successes as an artist were in NYC in the early and mid 1980s as a sculptor and painter often combining these disciplines with related photography. While photography remains a significant part of his continuing work, during the past 2 years, as a result of the forced isolation caused by the Covid pandemic, he found himself returning almost obsessively to Sculpture.

At first, almost unconsciously, he started to play with a variety of small remnant materials that were close at hand and easily malleable. He began creating small sculptural objects using torn strips of aluminum and tin foil from the tops of wine bottles; He crumpled tissues and discarded paper; he even designed objects with orange peels.

Gradually, he began using large strips of embossing foil normally used for small crafts and then turned to store bought sheets of aluminum roof flashing. These materials were more substantial, but still easily manipulated by hand and small tools, and could be shaped into larger and more durable sculptural maquettes.

Several things fascinated him about these mini sculptural forms:

One was the endless variety and complexity of shapes that evolved from even the tiniest of these materials.The eccentricity and uniqueness of the forms were particularly appealing. And then there was his mental visualization of these mini works transformed into almost monumental scale. Ultimately, these were to be formidable large scale sculptures.

As a result, Mr. Mindich began working with an art fabricator in Bethany, CT (Versteeg A F) fabricating works on a significantly larger scale, using much more durable materials like heavy aluminum and steel. A number of these larger works created during the past 18 months, together with a selection of his earlier sculptural maquettes, are now on exhibit at the Chroma Gallery.

Mr. Mindich’s larger scale sculptures are all based in concept on his early mini maquettes, but are never direct replicas. They are all independent works that evolve and transform, during extensive hand and machine manipulation, into the finished pieces. In all cases, he seeks to achieve the same sense of wrinkling and crumpling produced in his maquettes—not always easy to accomplish with the substantially harder and thicker metals being used for fabrication.Interestingly, there is often a resulting sense of softness and delicacy in the work that belies the hard metal surfaces.

As with much of his work over the years, in all media, the present series has been inspired in good measure by a love of poetry, literature and music. But more specifically, this work was generated by a sense of isolation during the long months of this COVID-19 pandemic.While his sculptural work is rarely a direct reflection of reality, in terms of process the work always flows spontaneously but seems to move subconsciously into what Mr. Mindich characterizes as eccentric, often biomorphic, forms; sometimes suggesting humans in lonely and and longing postures. But mostly the artist sees these sculptures as totally ambiguous objects of curiosity and mystery, leaving interpretation open ended and “uncertain.” Indeed, one of his favorite qualities in art is a simple “agnosia” — or the “knowing, by not knowing.”